A Pittsburgh native and current resident of Dayton Ohio, Rick draws on his experiences being born and raised along the rust belt to craft stories and songs that paint a picture of everyday life that all of us can relate to.

Making use of his influences in classic country, folk, and Americana, Rick has created a style he's proud to call his own and shares it with venues, homes, bars, and listening rooms big and small.

Rick's debut single "Drinking and Dreaming" is his take on the Waylon Jennings classic. The song was produced by Dean Miller (son of Country Music Hall Of Fame Inductee Roger Miller) and also features Melonie Cannon.

The Rick George Band will be releasing a follow up record in 2022 that won't disappoint country music traditionalists and new fans of the genre alike.

Rick George is back at the historic Dublin Pub!

Come out and support your local veterans!

Come out and chill at Sojourner's Brewerstillery (soon to be Bock Family Brewery!)

Rick George will be honky-tonkin' and rockin' the Nick's patio with a solo acoustic set in Xenia on 6/19 at 7:00!

Come out for some great food, drinks, drinks, some drinks, and music!

Come out to "The Crate Room" at Hidden Valley Orchards for some great drinks and farm fresh eats!

Come out and chill at Sojourner's Brewerstillery (soon to be Bock Family Brewery!) 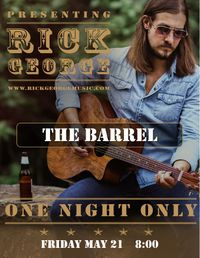 Debut appearance at The Barrel!

Come out to Cincy's Fountain Square and enjoy their incredible outdoor stage and bar! Rick will be playing from 6:00-7:30 followed by Heavy Hinges from 7:30-9:00

Playing in the the beer/wine bar area at the largest Kroger in the country! Come on out 4:00-7:00!